He’ll find you in your moment… 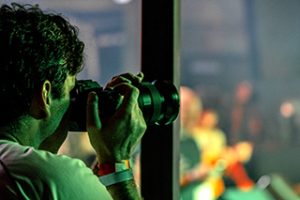 IF A PHOTOGRAPHER’S WORK is spontaneous, stealthy, and cuts subcutaneously, John Flandrick is a master of his craft. He is mentored by the best, world renowned photographer, octogenarian Santi Visalli, the Sicilian counter-culture photographer of the Italian ‘cinema noir’ movement, maker of over 50 Life and Time magazine covers of great celebrities,

Working with John, you’ll notice he is happiest when he is unseen and silent. In fact, his shutter is designed to make no sound. Although subtle, he is often in the middle of a happening, and when you see the event’s photos, you’ll find an imaginative trail of images that tell the whole story. John works in black and white, in color, in video, and with sound.

His ‘day job’ for years has been to document many of the Central Coast’s great collections of Art and Antiques, working with a certified appraiser. He has also shot for publishers as a maker of “notable author” photos in which he captures the writer’s essence; he has assisted in photographic book illustrations for the self-publishing industry. Documenting musicians in concert and rehearsal, he works in a current, timely blend of the edges of technology and classical photo-realism. He loves the movement and the colors of music and the stage; the devotion to certain kinds of musical genres shows in his work.

His favorite jobs are ‘shoots’ that create (a) document- a concert, an artist’s collaborative venture, a revealing speaking engagement, the plight of underappreciated street workers, or in a parade of images if he is shooting video. Unnoticed, he’s doing what he does best, to document, to narrate, to illustrate into a point of essence.

Considered by other photographers as a bit of a technological know-it-all, John was educated as a physicist and chemist, and trained with electricians and electronics. John solves the puzzle in photographic production between the revealed image and the manipulated image because he knows how to do both appropriately.

Back away from the obvious, and you’ll find John in his pictures, and he’ll find you in your moment—and document THAT. 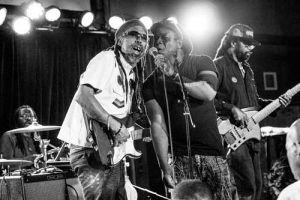 Perhaps no two bands are quite as synonymous with the legend of the Elders of reggae as The Wailers and Third World. I had the opportunity for a visual eye-feast when I covered both bands at two separate concerts at Ventura’s Discovery Concert venue; The Wailers on the night of September 20th 2017, and Third World on the night of October 11th 2017.

For example, you should have seen the diverse crowd react as The Wailers launched into “I Shot the Sherriff”, second only to the reaction to the band’s following song – one of raised arms, joyful smiles and spontaneous ‘sing along,’ which erupted during the opening bars of “Get Up Stand Up.”

For me, witnessing a landmark concert, seeing (but not hearing) the venerable Third World for the first time, now touring for 43 years, I shot an exclusive evening at Discovery. Yes, “96 Degrees in the Shade” convinced me that the diverse, many-aged crowd was experiencing one of the hottest nights of reggae on the Central Coast that night.

See the full review at the REGGAE VIBES website.

Based in Santa Barbara, California, and serving the Central Coast, Southern California and the West.